These Women Are Fighting to Save Our Sourlands 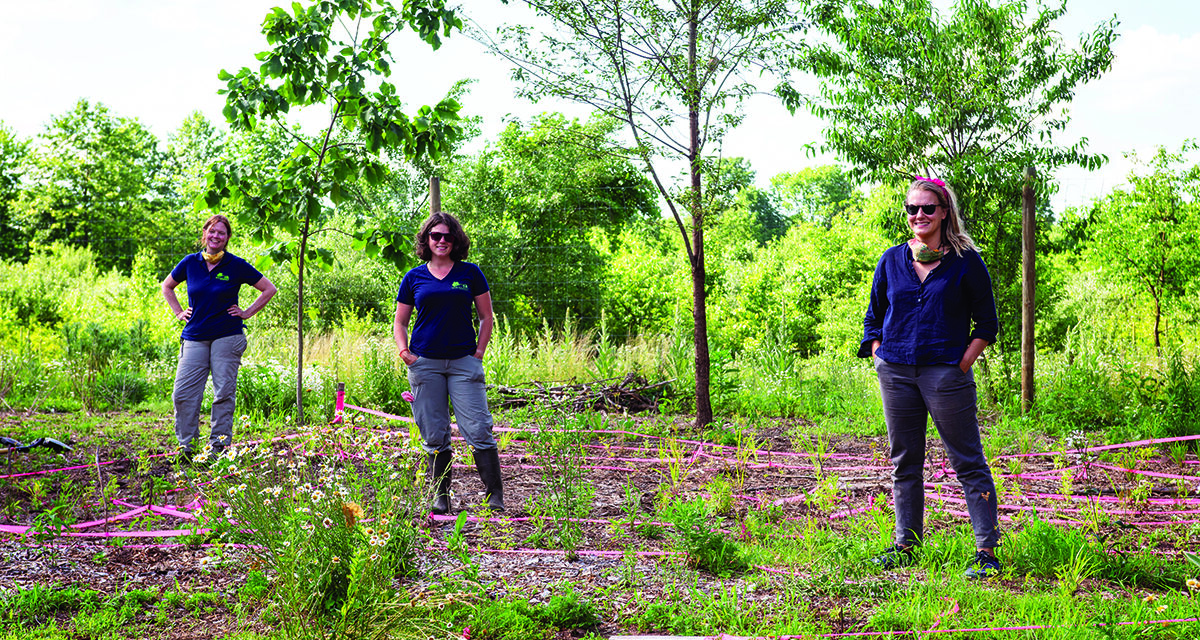 Meet the team behind the Sourland Conservancy, an organization working to protect and preserve a beloved local resource that is undergoing twin threats from nature and humankind.

The legend goes that General George Washington trudged up a rock outcropping to a high bluff to get a clear view of the Delaware river and ensure the Continental Army boats would not be spotted when they crossed the river under cover of frigid darkness on December 25, 1776. Nearly two and a half centuries later, the overlook is a cherished natural resource. On any given day, hundreds of hikers, dog walkers, and picnickers visit that very spot, now known as the Goat Hill Overlook just above Lambertville, NJ, to take in that same panoramic view of the majestic Delaware River valley.

The overlook is just one destination in the diverse landscape of the Sourlands, a 90-square-mile region that touches seven municipalities in parts of Somerset, Hunterdon, and Mercer counties. The Sourlands encompasses a complex ecosystem of forest, wetlands, grasslands, and varied plant and animal species, including migratory songbirds. Threatened and endangered animal species also call it home, including the barred owl, bobcat, Cooper’s hawk, grasshopper sparrow, Savannah sparrow, upland sandpiper, and the wood turtle.

While not as well-known as the Pinelands or the Highlands, the Sourlands is one of New Jersey’s great natural treasures, but its sanctity in peril, both from nature-made and human-made threats.

The most imminent threat is a green beetle known as an emerald ash borer (EAB), which has ravaged millions of ash trees in 25 states since it arrived in Michigan from Asia in 2002. EABs infested New Jersey in 2014, and the Sourland Conservancy, initially established in 1986 to protect the region and the wildlife from intrusive development, has been fighting back, offering education and resources aimed at saving trees and planting new ones.

However, when the scope of the problem came into focus in late 2019, the team knew it had to redouble its efforts. The beetles had already hollowed out the bark of ash trees throughout the region and would kill millions of them before they moved on. “When I heard that we were losing that many trees to the ash borer, it was really hard to take. It was devastating,” says Laurie Cleveland, executive director of the Sourland Conservancy. “In my own yard, I live on 3 acres, and we’re losing 30 trees. It’s also distressing for our ecosystem, but it’s also so heartbreaking for me.”

Cleveland, who has been living in the Sourlands for almost 30 years, was originally introduced to the conservancy via the other danger threatening to harm the delicate ecosystem—the PennEast Pipeline. From the time it was introduced in 2014, the conservancy vocally opposed the proposal for the 118-mile natural gas pipeline from Pennsylvania through towns in Mercer and Hunterdon counties, warning that it would have a devastating impact on the land, water, forests, and wildlife, including the Sourlands. “I was really concerned about protecting the Sourlands. I knew the forest was sensitive, and I knew there were some endangered species here,” she recalls. “At that time the PennEast Pipeline really seemed like it was a foregone conclusion, and there was really nothing we could do about it. But as it turns out, there was something we could do about it. And we are doing it. The Sourland Conservancy continues to fight it.”

With two major fights on their hands, the Sourland Conservancy headed into 2020 with big plans, including its signature Sourland Mountain Festival, which showcased a variety of musical talent and brought the community together each year. The slate also included the Hike the Sourland Series, Sourland Scavenger Hunt, Sourland Spectacular bicycle rally, as well as guided tours, runs, hikes, and photography sessions, all in an effort to offer education to the community and financial support to the Sourlands. Then came COVID-19, leaving the staff scrambling about what to do next.

Real Woman brought together three members of Sourland Conservancy’s team to find out how they dealt with the restrictions imposed by the pandemic, how they pivoted to more virtual offerings, and what they plan to do to save our Sourlands in the years ahead.

It’s been 6 years now that we’ve been fighting, and we’re going to continue to fight it until it’s done. 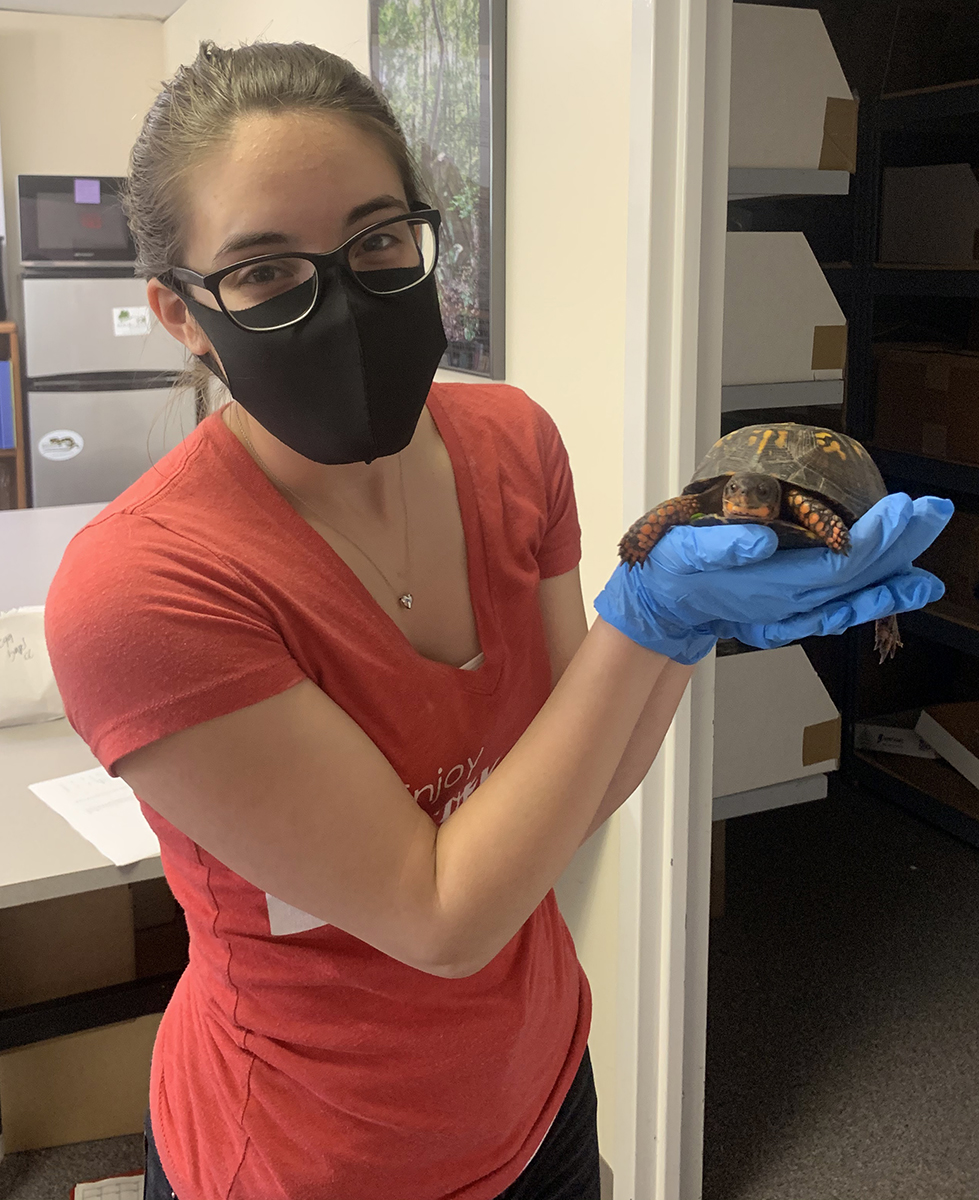 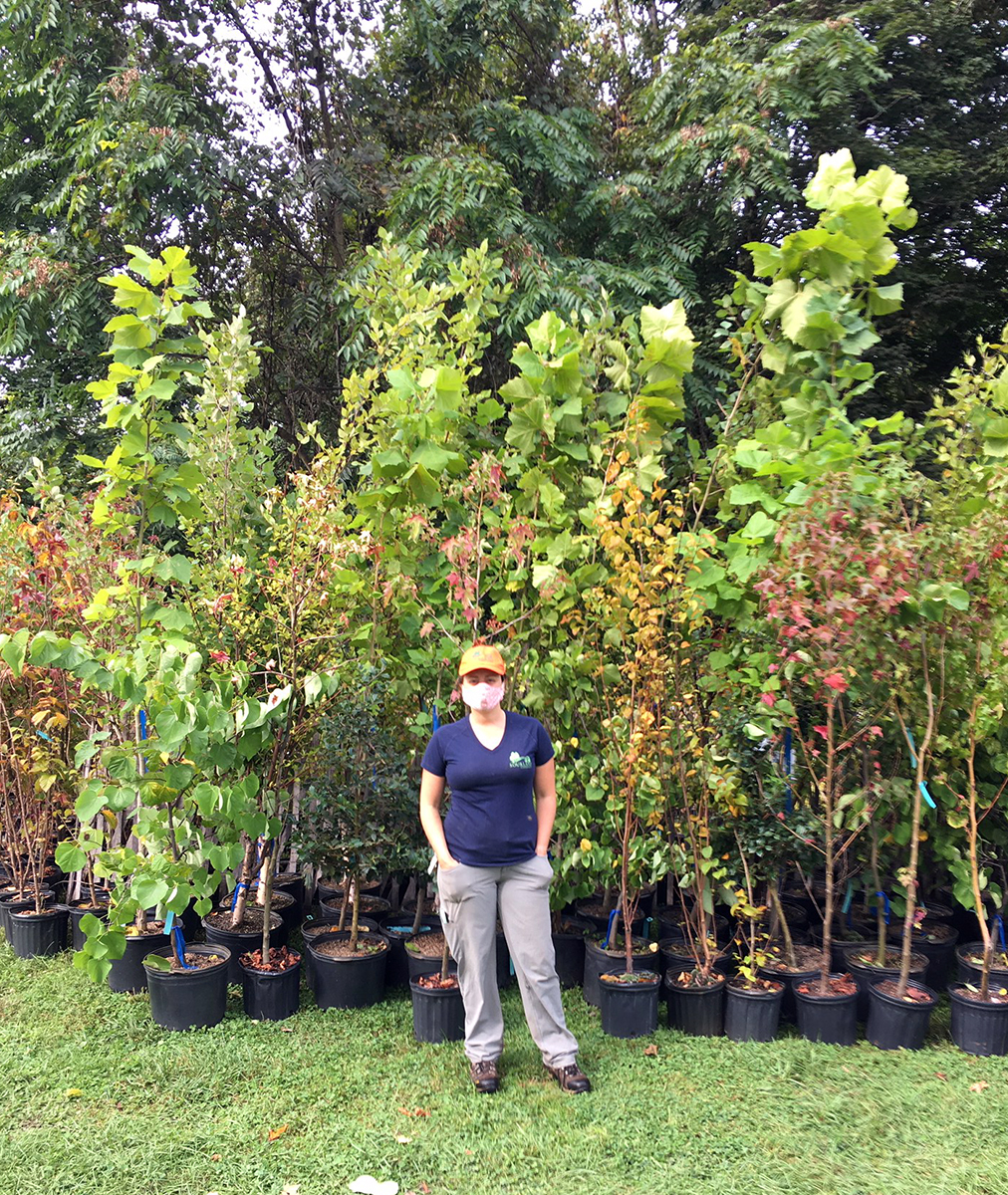 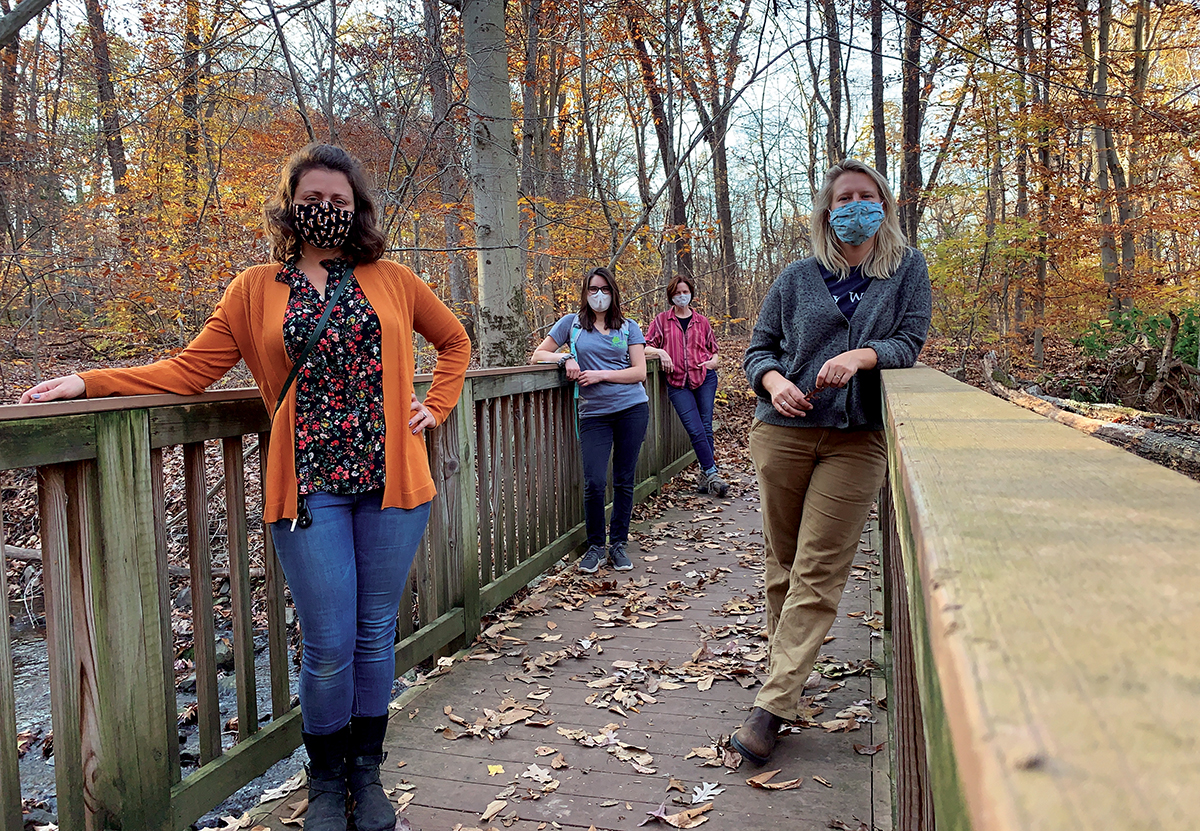 University of Delaware professor of entomology Doug Tallamy created Homegrown National Park, a grassroots call-to-action exploring ways we can all participate in restoring the ecosystem.

SHRINK THE LAWN Every square foot dedicated to the lawn is a square foot that is degrading local ecosystems. Turfgrass offers no ecological benefits but is nice to walk on. Tallamy suggests that we reduce our lawns by half for walkways and paths that define beds, tree groves.

REMOVE INVASIVE SPECIES Invasive plants are ecological tumors that spread unchecked into our local ecosystems, castrating the ecosystem’s ability to function if every property owner removed the most egregious invasives with the goal of ridding the U.S. of these troublemakers, or at least reducing their seed rain to manageable levels, would be largely realized.

PLANT KEYSTONE GENERA Tallamy’s research at the University of Delaware has shown that a few native plants, or keystone genera, form the backbone of local ecosystems, particularly in terms of producing the food that fuels insects.

BE GENEROUS WITH YOUR PLANTINGS To realize the ecological potential of our landscapes, most of us have to increase the abundance and diversity of our plantings. If you have one tree in your yard, consider adding two more. The idea is to plant groves of trees at the same density at which they occur naturally in a forest.

PLANT FOR SPECIALIST POLLINATORS Because so many of our native bee species specialize in particular plant groups when gathering pollen for their larvae, it is essential that we meet their needs in our pollinator gardens. Some of the best plants for specialists in most parts of the country include:

RW: Describe some of the plans you had for 2020 that had to be altered because of the pandemic, and what are you most proud of?

Laurie Cleveland, executive director: To offset the loss of trees, we planned to do plantings as part of the Roots for Rivers project we developed. We had to postpone that due to the pandemic. And we started to rethink how we could engage people. On the one hand, we were feeling more energized than ever about reforestation and plantings, but suddenly we were kind of hindered by the Centers for Disease Control and Prevention (CDC) guidelines of social distancing and lockdown. The question became: How can we restore the forest when we can’t have public plantings, which is the most obvious way to restore a forest?

We partnered with Rosedale Mills and Pinelands Nursery to sell tree kits with fencing, which you need because you can’t plant trees in the Sourlands without protecting them. The deer will eat any sapling you plant in your yard if you don’t protect it. We put together a new program called the Ash Crisis Team (ACT) tree sale to empower people to make a difference in their own yard. To date, we’ve sold almost 800 kits.

Carolyn Klaube, stewardship program coordinator: We were able to involve many more people by moving things online. Events that would have had an audience of 15 to 20 people were now watched by 1,000 people on Facebook Live, and they could interact and submit questions. That was a positive by-product of COVID restrictions. COVID forced us to be creative. We also got really organized so that when we had a planting event, people scheduled in advance. We had volunteers at each station who disinfected after each person got their chance to plant. We did two Roots for Rivers plantings where we planted 700 trees at one site and 500 at another, and we followed the CDC’s guidelines. It just felt so good to do something significant for the environment while also being part of the community for the first time in months.

Laurie Cleveland: It’s been phenomenal to see people getting engaged in so many ways. It helps me remain hopeful, even with the double whammy of the ash tree decline and COVID. It’s very inspiring when I think about how everything became inaccessible around us, how all of our lives literally shut down and became smaller in so many ways. But we were able to open up people’s minds to the natural world. We give people a chance to be part of something bigger.

Kariina Rand, marketing and communications coordinator: Coming from a corporate media environment, it’s been amazing to watch the way everyone rolls up their sleeves and does what needs to be done, especially during COVID. There’s no ego, and I’m very proud of the attention that the State is now putting on the Sourlands as an important resource. We want to be considered a special resource area—like the Pinelands and the Highlands. We want to be that well-known space for the ecology and the human stories that are so incredible here in the Sourlands.

RW: What are you most enthusiastic about in the coming year?

Carolyn Klaube: We have been working hard with our partner organizations to develop a reforestation plan for the Sourlands. This effort will be massive and is dependent on the collaboration of many fantastic organizations and municipalities of this region. We will be losing 1 million trees due to the Emerald Ash Borer, so we are in a race against time to get the reforestation efforts going before we lose all those Ash trees.

Laurie Cleveland: Whether it’s the ash trees, the whitetail deer overpopulation, or protecting the land and water from the pipeline, we are going to keep working every day, COVID or not. Some people still think it’s hopeless, that the government can do what they want and the little guy can’t do anything, but the pipeline was on track to go online a long time ago. We have postponed and postponed. It’s been 6 years now that we’ve been fighting, and we’re going to continue to fight it.

Women Entrepreneurs—Get Buy In With This Strategy