In 2008, at the Beijing Olympics, Australian Leisel Jones was favored to win the 200-meter breaststroke, with a chance to break the world record she established just 2 years earlier. But despite her superior strength and experience, the race didn’t stick to the script.

Jones started out leading the field, solid off the blocks. But just a lane over, 21-year-old American Rebecca Soni, from Plainsboro, N.J., caught up to her by the time they reached the first turn. Jones, with her powerful shoulders and strong arms, pushed ahead, but just 50 meters later,
the two swimmers were even once again.

“Jones was the reigning world champion and an Olympian, and I was the rookie,” says Soni, now 29 and living in Redondo Beach, Calif. “So I definitely was racing for second. But during the race, I realized I was kind of out-swimming her, even though she was stronger on the turns,” Soni recalls. “But it wasn’t until the last lap that I realized, This is scary. I can actually do something here. I caught her three times already on the four laps. I could do that one more time and maybe even win this.”

Soni did do something—she ended up surging ahead in the last 50 meters of the race, beating Jones to a gold medal by 2 seconds, which is an eternity in swimming, especially at the elite level in which fractions of seconds can separate first and last place.

“Here’s the best swimmer in the world in this event, and just because she didn’t expect me to be there, I kind of got in her head in the middle of the race,” Soni says. “That was the first real experience I had that demonstrated the power of what your mind can do.”

During that race, Soni broke Jones’s world-record time, and over the course of two Olympics—Beijing and London in 2012—she collected six medals, including three gold and three silver. Soni was named Swimming World’s World Swimmer of the Year in 2010 and 2011, and received the same award as American Swimmer of the Year in 2009, 2010, and 2011. She put an exclamation point on the end of her swimming career by becoming the first woman to swim the 200-meter breaststroke in under 2 minutes and 20 seconds in London.

Four years ago Soni retired from swimming, feeling that she had accomplished her goals in the sport. But then, at 25 years old, the swimmer was faced with the bewildering question so many retired professional athletes face, having spent the majority of their early lives singularly focused on exceling in their sport. What do I do now?

In addition to swimming, goulash was a staple in the household in which Soni and her older sister, Rita, were raised by their Hungarian parents, Peter and Kinga, who emigrated to New Jersey from Cluj-Napoca, Romania before Rebecca was born in 1987. She started swimming when she was 10, but she had very little context for what it looked like at the top of the sport, so the Olympic dream developed over time, as Soni continued to excel. “When I was young, we didn’t really have a TV, so I didn’t watch the Olympics, so I wasn’t that connected to it, and then all of a sudden I was there.”

At USC, the daily swim training became the metronome of Soni’s life, but a heart condition called supraventricular tachycardia (SVT), a type of heart arrhythmia, threatened to derail her career. SVT is a rapid heart rate (tachycardia, or a heart rate above 100 beats per minute) that is caused by electrical impulses that originate above the heart’s ventricles. “I had it since I was a kid, but it got stronger as the training got more intense, and when I moved out to California, it got worse in the heat. I would lose feeling in my arms and legs because you’re not getting any oxygen to your extremities,” Soni says. “It was always in the middle of practice, so I’d have to get out and wait. You feel like a bag of sand, like you have no strength in your body.”

When it happened in the middle of a race and left Soni swimming slowly with great effort just to finish the race, she told her coach she wanted to have a procedure called radiofrequency ablation, which uses a catheter and energy to destroy a small area of heart tissue that causes the rapid and irregular heartbeats. “It took me a while to come back for training, and when I did come back, I had to figure out how to trust my body again and how to push myself. But overall, it was amazing, and I was so glad I did it. I wasn’t going anywhere if I hadn’t had that procedure.”

Instead, she kept training, punching her ticket to Beijing at 21 with high hopes of performing well but without the intense pressure steeped on so many elite athletes. She credits advice from a friend, an athlete who had been through the Olympic experience before, for keeping her grounded and in the moment. “She said, ‘It’s just a regular swim meet. The pool is the same distance; there are still eight lanes, you’re still doing the same event.’ So I just tried to enjoy the whole process and the Olympic experience, and at the same time stay down to earth with the race itself and deal with the meet.”

Soni says her relaxed and determined mindset likely helped her win, whether it was beating Australian Leisel Jones in Beijing or setting a world-record time in London 4 years later. And that thinking served her well again when it was time to retire from the sport she loved and redefine her life.

By the time she retired after the London Olympics in 2012, the majority of her life had been spent focused on training for and winning races at just about every level of the sport. Still, the decision to retire was clear for Soni. “I was 25, and I had been doing this for a long time. I certainly would have the potential to make a lot of money if I went for another Olympics, but it just didn’t feel right. I could have kept swimming, but that would have been almost the easy out. I was just ready to take on the next challenge.”

But what, exactly? Soni, like so many athletes, fought depression and a period of aimlessness while she went in search of another passion to pursue or a purpose to claim as her own. The pivot from a physical challenge to a personal or professional one was slow and at times painful, Soni says. “It’s a transition every athlete goes through. You go from being super-focused and goal-oriented and counting down for that big event that gives you so much purpose to nothing. So it took a long time for me to redefine my goals and pivot toward something else, and that’s a process that probably still is underway,” she explains. “You can’t expect to get out of the pool knowing nothing but the black line at the bottom and find your dream job, or find a place where you have all this passion and purpose. You haven’t spent enough time looking and experiencing and feeling. You need time to learn what you actually like.”

While she was willing to give herself the time she needed to find a new path, the world still knew Soni as an Olympic athlete, and at times, she still struggles to be seen as an individual and as a woman, not as a medal count. “Swimming and medals is not how I define myself, but I know that’s how other people certainly do define me, and I’m still figuring that out. While I wouldn’t change it for the world, I don’t define myself by my medals, and that creates a big gap.”

It was her fascination about the mental aspect of “the game,” which started percolating after the 200 breaststroke in Beijing, that ultimately led her to her next life endeavor. She started reading everything she could find about psychology, and specifically its relationship to sports.

In an effort to help other athletes turn that mental energy into inertia, Soni and her counterpart Caroline Burckle, a swimmer who won a bronze medal in a relay in 2008, started Rise Elite, a mentoring and coaching program that helps athletes train their brains for competition through a more mindful approach. “An athlete wouldn’t dare take on a race without physically training, so why are they willing to race without training mentally? The idea of RISE Elite is to get to know yourself better and to understand how your mind works,” Soni explains. “Once you understand how it works, you start to see why you do certain things, and you’re able to better maximize that without really thinking about how or getting stuck in your mind.”

They coach athletes to visualize and quiet the mind in order to maintain focus and let the physical training pay off. One RISE Elite athlete says, “I have a better mind set about racing and my mental state at meets. My mentor and I talked a lot about how to think going into a race and my attitude throughout the meet, and I have to say I’ve seen a pretty big improvement in that aspect.”

RISE Elite gives Soni an opportunity to help athletes of all ages achieve what her mind and body did on instinct—relax, focus, and stay in the moment. And really, that’s a good game plan for everyone. 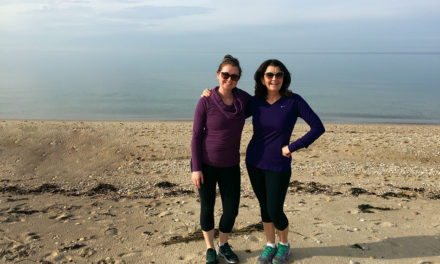 10 Questions I’ve Always Wanted to Ask My Mom but Haven’t. Until Now.

It Took a Village: The Miraculous Survival Story of TJ Drahuschak