Last August, Dr. Christine Hyde went on vacation to Vermont with her daughters, Juliette and Olivia, then 5 and 10. Olivia wanted to go ziplining, so Hyde agreed to take her. “We got to the front of the line, and the woman looked at me and said, ‘There’s a 250-pound weight limit.’ I was so ashamed, I couldn’t tell Olivia why we had to turn around.”

Despite being an accomplished and highly educated sex therapist, Hyde’s life was fraying. At 42, weighing 264 pounds, she was going through a painful divorce and battling extremely high blood pressure, sleep apnea, acid reflux, and a disruptive and chronic cough most likely caused by her lungs being crushed by excessive weight.

About a month after the Vermont vacation, Hyde called her ex-husband’s phone to speak to her girls during one of their visitation weekends with their dad. When the call went through, Juliette heard Willy Wonka lyrics ring through the house. “What do you get when you guzzle down sweets, eating as much as an elephant eats?” She answered the phone, the screen showing a picture of Jabba the Hut.

Not long after that, Hyde reached for a piece of bread during dinner one night, and Juliette stopped her. “She said, ‘Mama, please don’t. Papa says you’re going to die soon, and we’re going to have to live with him,’” Hyde recalls. “I suddenly got very scared and worried, and I realized I’m not living for myself anymore.”

And so, after decades of being buried under layers of emotional calluses and pounds of fat, Hyde found within herself an incredibly valuable asset that helped her change her life. Hyde discovered her resolve.

Hyde runs the New Jersey Center for Sex Therapy, and she was beginning to find that her weight was impacting her career—the coughing fits were interrupting sessions with clients and lectures she regularly gave to rooms of up to 300 people. “My body was screaming, You’re breaking down from the weight,” Hyde says. “But I think if my children weren’t involved, I probably would have continued on that path.”

It was time to get healthy.

So on October 9, Hyde took the first in a series of decisive and bold steps that included attending Overeaters Anonymous, taking group exercise classes at the gym, and seeing a metabolic optimization specialist to change her food intake. Although she had tried plenty of diets over the years, she knew this time she had to touch on everything—nutrition, fitness, and emotional wellbeing—all at once. The nutritionist, Alyssa Cellini, put her on a high-protein, high-vegetable diet with very little starch, which required her to cut out wheat, flour, sugar, artificial sweeteners, alcohol, and dairy.

Within six weeks of starting the healthy-eating plan, Hyde no longer had elevated blood pressure or reflux, and she had eliminated the uncontrolled coughing fits. Within three months the sleep apnea was gone, and her energy surged. “As you start detoxing your body, your mind gets clearer and your energy level soars,” Hyde says. “You don’t realize how bad junk food and poor-quality food affects how you think.”

She exercised regularly, despite the fact that in those early days she could barely finish a class. “I was embarrassed. I felt everyone was staring at me,” Hyde says. “I think that’s where a lot of overweight people go wrong. Once you go to a class two, three, four times, people start to smile at you. People don’t see the weight.

“And people, quite frankly, don’t give a damn what you look like.”

Three days a week, Hyde took a class called IntenSati at the Gold’s Gym in Bridgewater, N.J., which combines empowering affirmations with interval training, martial arts, dance, and yoga in an effort to build your body and your mind simultaneously.

She also hired a health and fitness coach, Tiffany Knight, who asked Hyde to decide on a goal—something she’d like to do that she’d never done before. “I said triathlons, but at 264 pounds, I thought, oh yeah, OK. But I started researching triathlons, and the first little one I found—the Mini Mighty Man—was in April in Long Island.”

In addition to being overweight since she was in college, Hyde had sworn off cycling since she was 19, after a horrible accident. On her way to her lifeguard job, she flew over her handlebars, leaving her bloodied with a broken elbow and wrist, and major road rash. Doctors at the time told her it was only her helmet that saved her from a serious or fatal brain injury, which spooked her from riding again for more than two decades.

But this past January, having already shed 45 pounds, Hyde went to Club Med in the Dominican Republic for vacation and saw they were offering a mini-triathlon during her stay, an event that involved swimming, kayaking, and running. For the first few days of the trip, all Hyde wanted to do was go home. “I had a full-blown pity party. I said life isn’t fair, and I called an Overeaters Anonymous person, and they said, ‘If life was fair, maybe you would have cancer, maybe you would live in poverty. Or maybe other awful things would happen to you too. It gave me perspective. Here I am whining because I can’t have éclairs. And I reminded myself that I can eat whatever I want—I am choosing not to.

“So I showed up for the triathlon with all these really fit people, and I was mortified. But I kept telling myself I was there for me, not for them. I did it, and finished. I finished last, but I finished. I arrived 45 minutes after everyone else, but every single participant waited for me to finish and clapped for me,” Hyde recalls. “It was more exhilarating than 300 people clapping at the end of a presentation.”

That event, perhaps more than any other, crystalized Hyde’s next goal. She wanted to become a triathlete in the truest sense.

As months fell off the calendar, weight dropped off Hyde as she stuck to her food plan and fitness regimen. And, with a renewed confidence, she began to circle dates on the calendar for spring, summer, and fall triathlons. At the end of March, for the first time in 23 years , Hyde got back on a bike. She invested in a specialized carbon road bike and began preparing for Mini Mighty Man in April.

Hyde has found comfort in her routine, every single day eating the same lineup of high-protein foods and vegetables prescribed by her nutritionist. Fat continues to give way to muscle, and having faced down one of her biggest fears, getting on a bike, Hyde has taken on the triathlon circuit with a Teflon resolve, first just finishing and eventually really competing. She recruited friends and family members—even those who struggled with their own weight—to do triathlons and other races with her.

After completing two sprint triathlons in June, Hyde signed up for the New Jersey State Triathlon, this time opting for the Olympic length, which consisted of a 1 mile swim, a 23 mile bike, and a 9K run. She finished the race in 3:37:49, and she describes crossing the finish line as one of the most amazing feelings of her life.

Then, just over a month ago on September 29, perhaps the pinnacle of her season of firsts, Hyde rode in the Twin Lights century ride—a 100-mile bike race around Spring Lake, Sea Girt, and Brielle in New Jersey. “If you would have told me in March when I started riding that I would have done a 100-mile ride in September, I would have laughed at you,” Hyde says. “But when you face your fears, amazing things can happen.”

Today, standing at 5’2” and 138 pounds, Hyde talks about the future in terms of Tough Mudders and Spartan races, century rides and even loftiest of all—the Half Iron. “What’s surprised me most about this whole process is how true it is that your mind quits before your body,” she says. “My mind will tell me I can’t, but it’s a lie. I don’t even believe I can’t do it anymore. I know I’m going to do it.”

Despite the success, every day is still a battle. “Like many overeaters, food comes to mind when I have any emotion. While it’s significantly less today, it’s not gone. It’s not like I swallowed a miracle pill,” says Hyde. “There have been days when I’ve wanted to devour the pantry, so I’ve had to remove myself from my house.”

Although this began as a journey to improve herself for her children, Hyde has accepted that to maintain her health, it has to be about her. “It sounds selfish, but it’s about being kind to my body and to myself. I didn’t realize that filling your body with junk is being unkind to yourself,” Hyde explains. “I do not have a goal weight. My goal is 18 to 20 percent body fat, and whatever that ends up being number-wise, is the goal.”

And compared to staring down one fear after another and accomplishing formerly unthinkable achievements—the zipline (with Olivia), triathlons, a century ride, and living day in and day out in a healthy body—the numbers are the easy part. 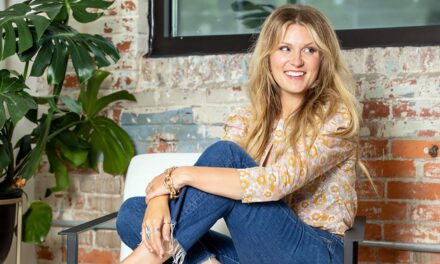 A Painful Choice, But a Happy Reunion