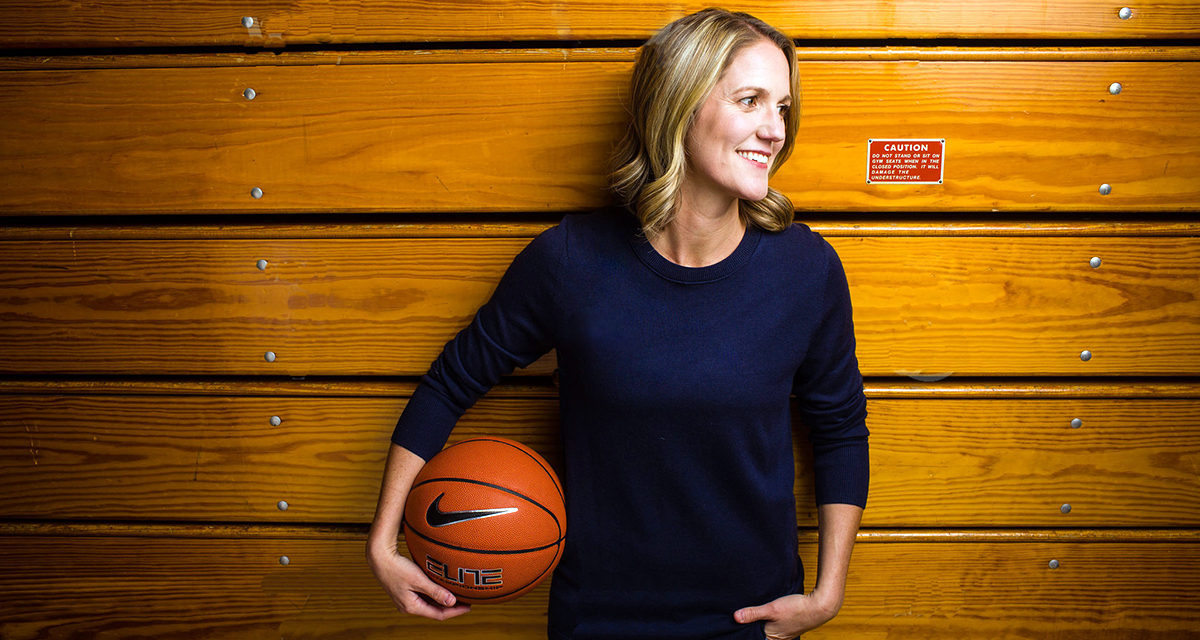 Her résumé, her Princeton University bio, and even her Wikipedia page will all tell you the same thing: Courtney Banghart is a winner.

There are academic achievements—a bachelor’s degree in neuroscience in 2000 from Dartmouth College and a master’s degree in writing and leadership development from the same Ivy League school 7 years later. Then there’s her athletic prowess—the Amherst, N.H., native knocked down a Dartmouth Women’s Basketball–best 97 triples in 1999, which earned her the Ed Seitz Award as the top three-point specialist in the country. She was inducted into the New England Basketball Hall of Fame in 2006.

And then there’s her coaching record. At Princeton alone, she’s led her team to a 194-77 overall record and a 104-19 mark against Ivy League opponents, and she coached the Tigers to an undefeated 30-0 regular season in 2014-2015, which is the best record in Ivy League basketball history.

While these stats are impressive, they’re just back-of-the-baseball-card stuff. It’s the things you won’t see on paper—the personality traits and other intangibles—that make Banghart distinct and memorable, not only among her coaching peers but also as a human being. For example, her résumé won’t tell you that she talks wickedly fast, her words whizzing by like machine-gun fire. It takes just a conversation or two to recognize that Banghart is smart, and her passion for the game—and for life—lies a millimeter under her skin. You want to test how well she’s maintained her three-point shot? Just ask her. She’ll take you on, right now.

Her bio won’t mention that she bungee-jumped in Switzerland or hitchhiked in Alaska or that she’s funny and warm and self-deprecating. She unabashedly tells the story of losing track of her car at the Disney Wide World of Sports Complex during a massive downpour when she was a second-year assistant coach, eventually being rescued by legendary Tennessee Women’s Basketball coach Pat Summitt, who shielded her with an umbrella and drove her through the parking lot until she found her car. And her Wikipedia page won’t tell you that she was too focused on her team’s upcoming game to meet President Obama, who came to watch Princeton play (and beat) Green Bay in the first round of the NCAA Tournament in March 2015. Instead of leaving her courtside post, as the opposing coach had, to greet the President during warm-ups, Banghart held her ground, wanting to demonstrate to her team the kind of focus and determination it takes to be a winner, even when sacrifices need to be made.

Ditch the résumé, the bios, and the Wikipedia pages if you want to know about Banghart. They won’t tell you those kinds of things about Coach. But we will.

Maybe Banghart would have been more surprised than anyone if you’d told her that at 38 she’d be the head coach of a women’s basketball team and the mother of twin 3-year-old boys and a 1-year-old daughter.

She was teaching biology and eventually psychology at a boarding school in Alexandria, Va., when she got a call from Chris Wielgus, the coach she had played for at Dartmouth. “She asked if I would want to come back and be an assistant coach, and at that time I was so happy doing what I was doing that I thought, I’m good. I can’t coach basketball for a living. It’s not really a job,” recalls Banghart.

But when the offer came again a year later, she accepted, deciding it might lead to other opportunities and give her the chance to get a postsecondary degree. She returned to her alma mater to be the assistant coach while she got her master’s degree in writing and leadership development. She was traveling so much for games and recruiting that she decided to make the most of it, utilizing her position as a coach to learn from the best. “For my thesis, I wanted to find out if coaching was a vocation, and if so, did I have what it takes? I used my platform as an assistant basketball coach to gain access to some of the most famous, most decorated, and successful coaches across all sports,” Banghart says. She got in-person interviews with 20 coaches and created an oral history of leadership in sports. She says the themes she touched on in her thesis continue to be useful to her as a coach and a leader.

“I learned that to be a successful leader, you have to do it your way. For a young coach, I didn’t feel like I had to be Pat Summitt or Geno Auriemma [longtime head coach of the University of Connecticut Huskies women’s basketball team]. I have to be true to me, and therein lies my best chance to be successful.”

The chance came before she could blink, although she was again facing a crossroads. She had to recommit herself to coaching women’s basketball. “All within 1 week, I defended my thesis, turned 29, and got a call from Gary Walters, who was the athletic director at Princeton University, asking me to interview for the basketball job,” Banghart recalls. “At that point, I was thinking of maybe going on The Amazing Race with my brother. I still wasn’t convinced that basketball coaching could be a vocation, but I’ve done nothing since.”

Head in the Game

In 2007, Banghart toured the Princeton campus and met with Walters. At the time, Princeton Women’s Basketball was chugging along, but Banghart felt certain she could help take it to the next level. Coming from Dartmouth, she believed in the Ivy League and knew that the Princeton Athletic Program had won more Ivy titles than any other program. “The school has had a national champion each of the last 42 years—it’s a nationally recognized athletic program. I knew I’d be coaching Ivy League student-athletes, kids who are used to working and earning opportunities. That’s a good equation for success,” Banghart says. “It was a culture of excellence, but the basketball program had never quite figured it out. The program had never been to a NCAA Tournament, but I didn’t think there was something institutionally wrong with the program—they hadn’t quite found the right fit.”

She took the Princeton coaching job and was quick to earn the players’ trust with her energy, positivity, and authentic leadership. “She treats her players like adults—she’s never out to humiliate a player or dress them down in front of the team,” says 22-year-old Blake Dietrick, a star point guard who played for Banghart at Princeton for 4 years and now plays professional basketball in Australia. “She’s not a screamer. If you’ve done something wrong, she will pull you aside and talk to you about it instead of making you feel bad in front of everyone. She’s logical and measured in the way she speaks. She’s just a great coach.”

In short order, Banghart turned Princeton Women Basketball into a formidable and, eventually, winning program. In fact, when Dietrick came on board in 2011 as a freshman, Banghart’s Princeton squad had won two Ivy League Championships in a row. Banghart changed the composition of the team by recruiting great players, but she also excelled at strategy and devising an offense to maximize her personnel, Dietrick says. “During my first few years on the team, we were very athletic—we could run the floor and defend well, so we focused on getting out in transition as much as we could,” says Dietrick. “During my senior year, we weren’t quite as athletic as the competition on a national stage, so she had us doing more in the half court, focused on set plays. She knows her players, and that’s one of her biggest strengths.”

That year—the epic 2014-2015 season during which the team went undefeated in the regular season—Dietrick says she knew there was something special when the team dreaded leaving for a 4-day Christmas break and couldn’t wait to return to school and get back to playing basketball. The magic carried throughout the season with everyone focused on the prize: winning the Ivy League Championship, an achievement that had evaded them the year before. And even as the attention on the team from outside and the intensity from within continued to build, Banghart kept the athletes grounded and disciplined through the highs of being nationally ranked, going undefeated, and getting into the NCAA Tournament. Dietrick says the sweetest moment for her, as the team’s point guard and on-the-court leader, was at the tail end of the first game in the NCAA Tournament: “We had the game in hand, and [Coach Banghart] subbed me out. As I came off the court, she gave me the biggest, sweatiest hug. I’ll never, ever forget that moment.”

There are plenty of other things Dietrick won’t forget, like the fact that Banghart helped her improve her three-point shooting. “I have always been a decent three-point shooter, but she honed my shot and made it better than it was before,” Dietrick says. “She gave me the confidence and green light to shoot. The thing is, even if your form is impeccable if you don’t have the confidence, that ball is not going in.”

She also won’t forget that Banghart went out of her way to get to know her roommate and best friend, Camille Hooks, who played water polo for Princeton: “She made a conscious effort to meet Camille and pay attention to the water-polo team. She showed me that I was more than just a cog in the Princeton Basketball wheel.”

And she won’t forget that Banghart returned to the court every day, even after the 30-0 season ended, to help get Dietrick ready for the WNBA draft. “She would always say that I was the team’s fearless leader. But she was our fearless leader, without a doubt. Any of us would have gone to war with her, for her. We fully believed in her as our coach,” says Dietrick.

While Banghart gives much of the credit to her team and to Dietrick for the consistency, hard work, and maturity they demonstrated, she also recognizes that it’s the coach who sets the tone. “When you watch our team practice, you’ll see how hard they play,” Banghart says. “I always say your team plays to the personality of its leaders, so I want them to be fearless, I want them to be relentless, and I want them to be compassionate.”

Banghart now considers being the head coach of Princeton Women’s Basketball a vocation, a passion, and a worthy challenge. And she’s always up for a challenge. In fact, if you’re not doing anything later, she’ll meet you at mid-court to shoot some threes.