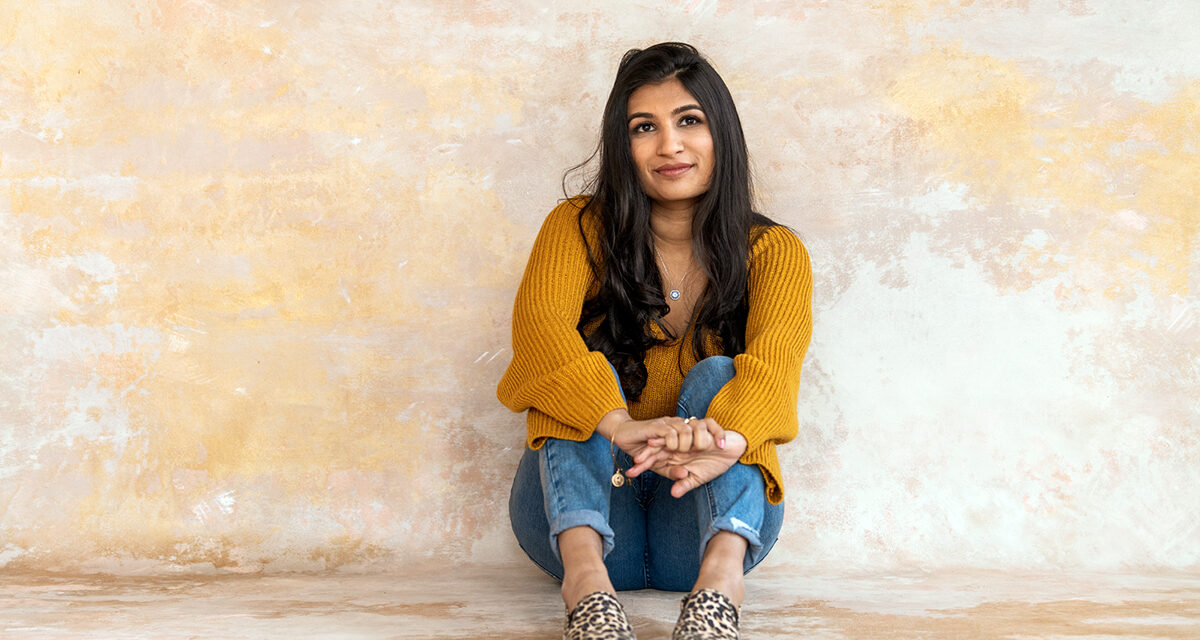 When she was 9, Neha Gupta sold her toys to buy books for orphans in India, an endeavor that evolved into a nonprofit called Empower Orphans, which has helped tens of thousands of orphans worldwide. Last year, she launched a platform to unite and empower young people globally. Now in her second year of medical school, Gupta has her sights set on impacting the medical world.

In 2006, an exuberant 9-year-old girl named Neha Gupta visited an orphanage in Haryana, India. It was her family’s annual tradition—she and her cousins spent time with the children in the orphanage and handed out books, food, and clothes.

While she was there, several kids were making fun of one of the other orphans—also a 9-year-old girl—and Gupta asked her what they were saying to her. “She told me they were teasing because she didn’t know when her birthday was or where she was born,” she says. “When I asked her why she didn’t know, she told me she was abandoned on the side of the road as a young child, and she never met her birth parents. We were the same age, and it just broke my heart to think about her situation. I tried to put myself in her shoes— Where would I be if I had been left on the side of the road?”

She realized then that so many of the things she took for granted—love and support, education, food, and even her health—would be harder to come by, just like it was for her friends at the orphanage, and she wanted to do something to change their fortunes.

Gupta’s upbringing could not have been more different. She was born in New Zealand and raised in Bucks County, Pa. by her Indian parents who took her back to India every year to spend time with family. She grew up hearing tales of female ancestors who broke barriers and opened doors for women in India and around the world. Two key figures in these retellings were her great-great-grandmother, Sharda Mehta, and her great-great-aunt, Hansa Mehta, who crusaded for women’s rights. In fact, it was Hansa Mehta who was responsible for compelling the United Nations to make the opening lines of the Universal Declaration of Human Rights gender—from “All men are born free and equal” to “All human beings are born free and equal.”

“Hearing all these stories about these women changing the world and knowing they were my ancestors made me think, I’m a girl, and so what? I can also change the world,” Gupta says. “As a kid, those stories of my activist ancestors shaped my understanding of what even just a small kid could do in this world, and especially a girl.”

Gupta was both moved and plagued by the Indian orphans she visited that year. So, on the flight home, 9-year-old Gupta brainstormed ways she could help, later telling her parents she wanted to sell her toys (and some of her friends’ toys) at a garage sale to raise money to buy books for the orphans.

She raised more than $700, which paid for books, supplies, and eventually a library, and fueled her activist spirit. “We were able to go to India the next year for Christmastime and start a library. It was incredible to see how far money could go over there, and how much we could do for these kids with just $700. And I thought OK, if I can keep going with this, then we can do more and more.”

Seeing how much good she could do, she began raising more money and seeking donations from friends and family. The following year, having raised money selling handmade greeting cards and charms, she returned to India with $5,000, which she used to fund a library and buy food, clothes, and blankets. And that’s when her humanitarian effort began to truly take form. “Every child deserves the right to have a chance at life, to be successful, to be confident, and to grow into people they can be proud of,” Gupta says.

Hearing stories about women changing the world and knowing they were my ancestors made me think, I’m a girl. So what? I can also change the world. 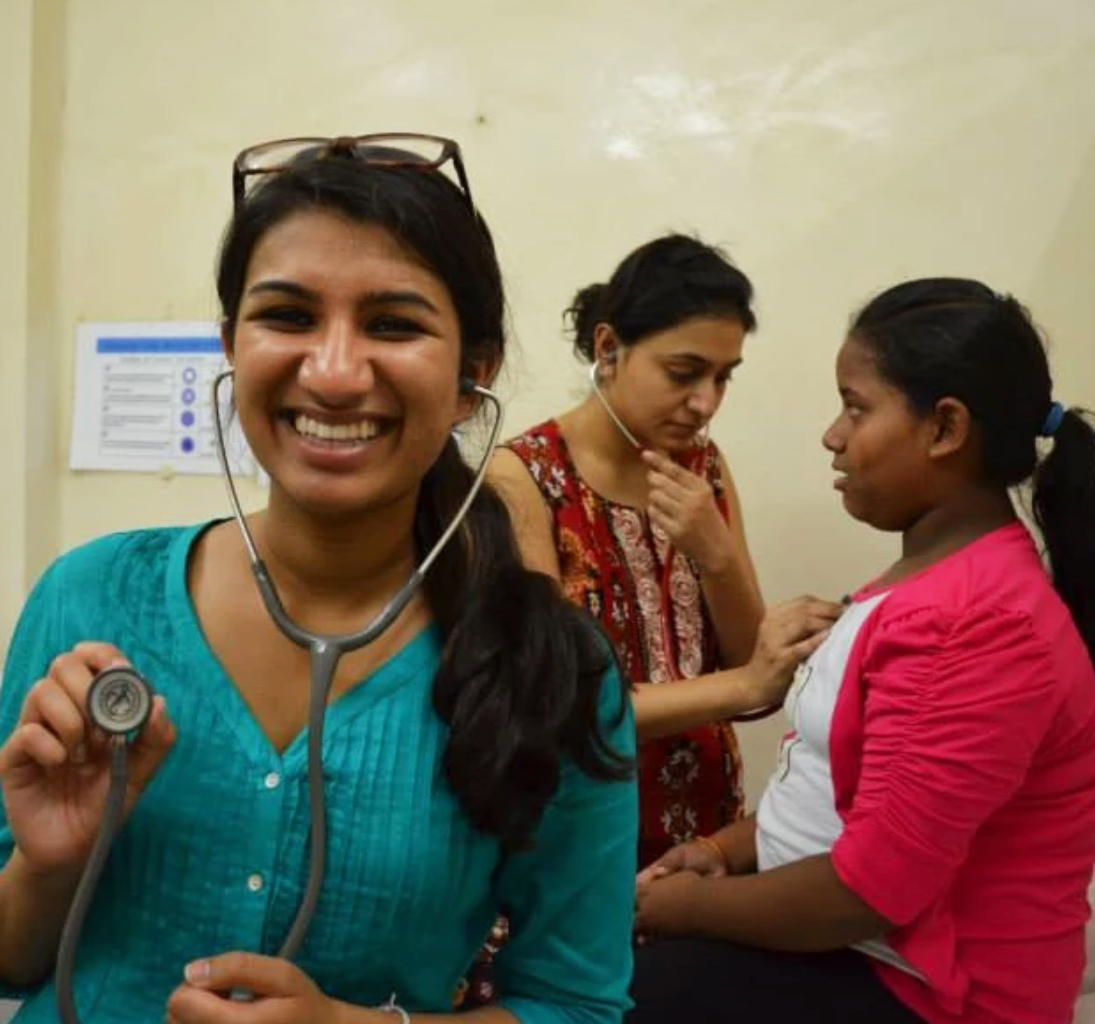 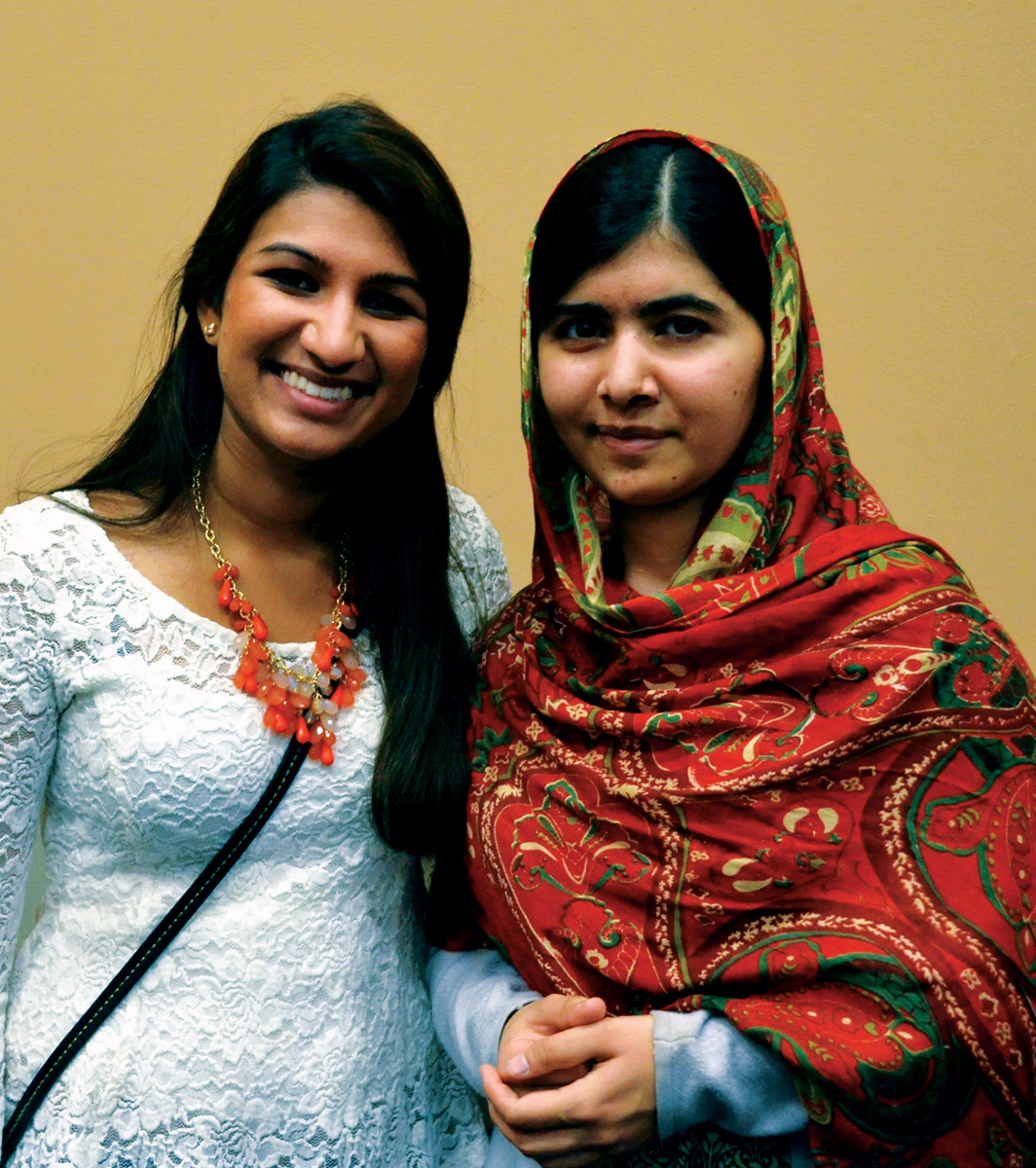 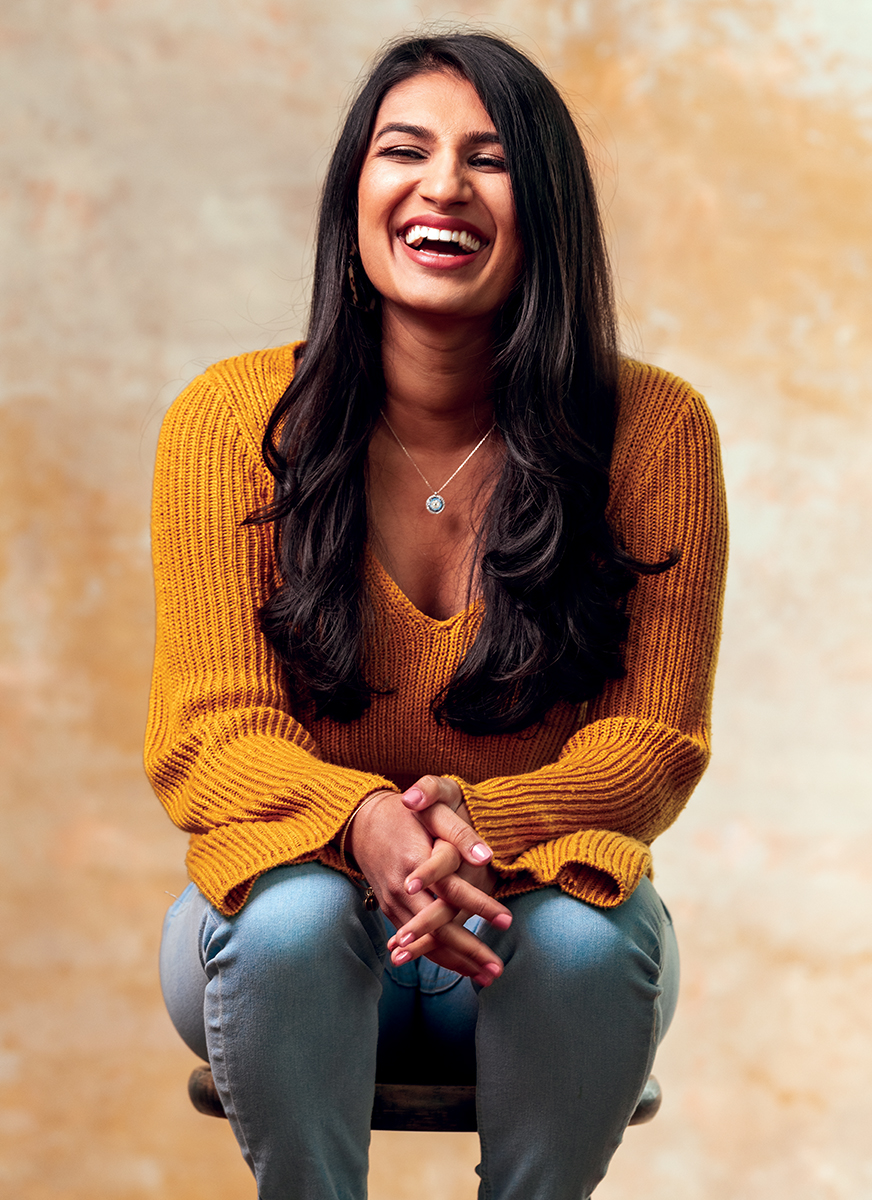 In her first year of med school, Neha Gupta started another nonprofit called State of Youth to engage and activate young people in global change initiatives. In partnership with KidsRights and connected by Facebook, State of Youth aims to empower youth by building a nonpolitical, nonreligious digital “state” that transcends borders. The goals are to increase awareness, build advocacy, and create action against the most pressing issues the world faces today. State of Youth has a Youth Board that leads and oversees the overall vision of the nonprofit. They lend their voices, networks, experience, and time to State of Youth to ensure the platform represents a diverse youth point of view. “I know a lot of young people felt really hopeless, so being able to empower them in this way and seeing younger kids getting engaged is so incredible,” Gupta says.

Visit stateofyouth.org to get engaged.

Those early successes raising money and purchasing supplies for the orphanage powered Gupta to establish Empower Orphans, a nonprofit organization that aimed to provide resources and support to orphans. “It started as the books at the library for this one orphanage, and then it expanded into other supplies, like backpacks and shoes, and food,” Gupta explains. “We eventually hit a wall with that orphanage because they ended up getting government funding. So, we decided to expand to other orphanages and schools.”

Empower Orphans expanded its reach throughout India, providing resources like computers, tablets, microscopes, health care, and even the fees to attend school. As the nonprofit grew, so did Gupta’s appetite for what she could accomplish. The aim became to help all vulnerable children and even young women globally. At present, Empower Orphans works in India, the United States, Uganda, and Haiti and has impacted 30,000 children.

Seeing how work on the ground and intentional and deliberate use of resources could make a significant impact, Empower Orphans began supporting women, providing resources for entrepreneurism and mentorship. In one instance, they used an extra room in one of the schools in North India and turned it into a sewing workshop. “Women were telling us they wanted to start businesses, but they didn’t know what to do or how to do it. They didn’t have the funds to get the equipment, so we bought all the sewing machines,” she says. Empower Orphans created workshops for women to learn how to sew, and provided tools to help them start small-scale businesses. One girl named Meena used the workshop to start a business, enabling her to bring an income into her home where her father was out of work. “It meant they could get electricity into their home, and her brother was able to stay up late and study for his electrician’s exam,” says Gupta. “All of a sudden there was this dual-income in the family that was being supported by the kids.”

Empower Orphans became a force in India, establishing schools, libraries, computer labs, a science center, the sewing workshop, and sponsoring individual children throughout the country. In 2014, Gupta became the first American to win the International Children’s Peace Prize, an award won by female education activist Malala Yousafzai the year before, and climate activist Greta Thunberg in 2019.

As her footprint continued to grow, Gupta recognized the desire to make change was contagious. She attended Penn State’s Schreyer Honors College and began a PSU chapter of Empower Orphans. “It was so rewarding to see so many students engaged and wanting to take Empower Orphans on as their own,” Gupta says. “Hearing their stories about the time they spent with kids in an orphanage in Uganda and truly touched me.” 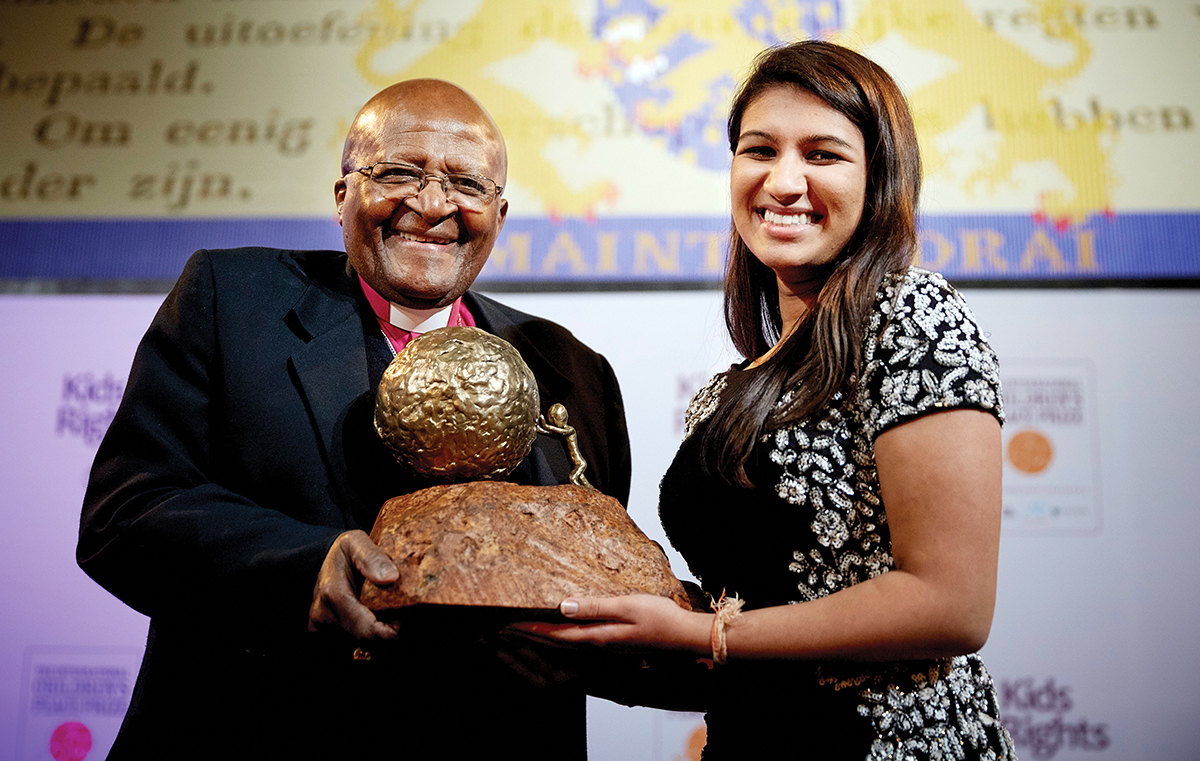 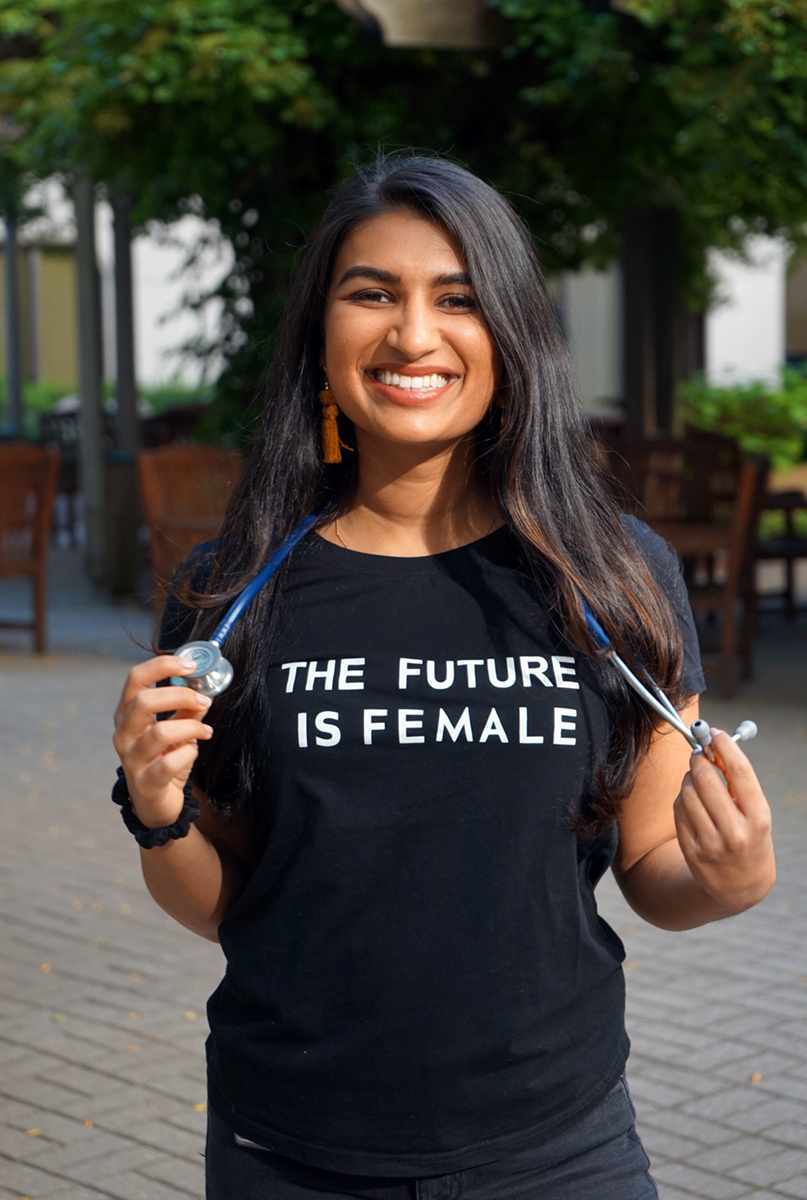 Barely a month into her college career, Gupta sustained a traumatic head injury leaving a football game that upended her first year and resulted in years of rehab. It was the same year she won the International Children’s Peace Prize, and she struggled to manage her injury while also being offered a host of opportunities like speaking engagements and campaigns with major companies that would elevate Empower Orphans. “As I started to get better, I threw myself into brain injury research, and I ended up studying neuroscience at PSU. I worked in the sports concussion research labs at Penn State Concussion Center, and we did some incredible work with virtual reality and electroencephalography (EEG) testing,” Gupta says. “All of these things started to come together for me, including my own patient experience, the global health inequities that exist for women and children, and the innovations I started to see. I wanted to be an advocate for vulnerable patient populations. I realized medical school was going to be my path.”

Now, just over 6 years later, Gupta is in her second year of the MD program at the Penn State College of Medicine in Hershey, Pa. While she tends to gravitate toward working with children and women, she’s keeping her mind open to all aspects of medicine. “I care about helping people and their families through their medical issues, but also working on health care access globally, and incorporating innovations into that to increase delivery and access,” she says.

However, 24-year-old Gupta is also cognizant that COVID-19 will play a significant role in shaping her med school experience, the trajectory of her career, and perhaps even the medical profession more broadly. “When I came into med school, I faced the normal frustrations—just getting lost in all the studying. But then came this massive global pandemic. People are dying, and hospitals are reaching capacity. We started to see how inequalities in different communities were having such a major impact,” she explains.

At Penn State College of Medicine, students formed COVID task forces, focusing on various needs of the health system. Gupta dedicated her time to researching new technologies that were bridging gaps in public and community health and her experiences with Empower Orphans once again became top of mind. “COVID has made me appreciate how much my previous experiences have come into play and will continue to fuel my passion,” she says. “As a physician, you’re not just treating patients. You are also serving the public and global health, and not just exclusively from what you read in a book.”

Despite all of the challenges in the health care world, Gupta is bullish about the future. The intersection of technological advances, an infusion of millennial energy, and the awareness brought to light by COVID will have a significant impact on the future of health care, she says. “I think there’s a good chance that COVID will change the way that we deliver health care to people, the way that new technologies bridge gaps to deliver better care in rural areas, or even in urban areas among diverse communities,” Gupta says. “I have a lot of hope and confidence in this current generation of doctors.” 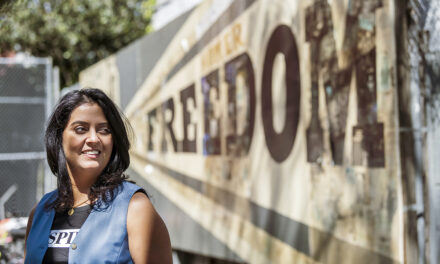