My Experience Sleeping On The Street to Support Homeless Youth

When you get the chance to extend yourself for a cause that really moves you, you want to take it. I’m going to get the chance again on Friday, May 1, when I will participate in the second annual Covenant House Sleep Out: Mothers Edition. Homelessness, especially where young people are involved, is just one of those issues that really gnaws at me, so last year I jumped at the chance to sleep outside to raise awareness and money in support of homeless youth. And I plan to do it again.

When the Mothers Edition was introduced last May 2014, I was eager to raise money to help fund Covenant House, which offers shelter and resources to homeless youth in 27 cities throughout the United States, Canada, and Latin America. At first, I was so focused on fundraising with my team, I didn’t think about the actual sleeping out part. But as the weeks grew closer to the event, I started to visualize what it would be like. Would I be cold? Would I be scared? Would I feel safe? As an adult, I couldn’t even imagine having to worry about all the fears associated with sleeping on the streets. Then, to think about a teenager on the streets or even a mother and child­—it broke my heart.

The evening of the Sleep Out was a powerful night, which brought to the surface so many emotions. Just thinking about all of the little things we do for our children—cutting the crusts off their sandwiches, tucking them in at night, and making sure they’re always comfortable and cared for—barely scratches the surface. I thought about the big things—every kiss and hug, every word of encouragement, and every meal made to nourish their growing bodies. As a mother, I get a chill just thinking about kids who live in this world without a parent or loved one who cares if they are in a safe and loving home or on the streets alone.

We spent the night of the first Sleep Out listening to testimonials from shelter residents. And as these teens spoke about life on the streets, we discovered how empowered they were by having their most basic needs met with food, clean clothes, and a safe place to sleep. With the help of the Covenant House and support from people who truly care, they are able to move forward with their lives, finish high school, maintain jobs, and find their way to independent adulthood.

At the end of the night, we gathered our sleeping bags and cardboard boxes to head outside. While I had my team to sleep beside, I began to consider what it would be like to sleep alone on a park bench or in an alley. While lying on the hard pavement, I thought about all of the brave homeless kids. Putting aside the obvious fear of the elements (which luckily were not a big factor that night), I was not at all prepared for the sounds while sleeping out. Throughout the night, we heard the barreling of trucks speeding through the Lincoln Tunnel and car horns, all of which seemed amplified in the dark. How could anyone sleep through this? Each year, over 2 million kids endure not only these sounds but the fear of living on the streets. Somehow, many of them manage to get up every day, go to school, and complete their education or hold down a job. Their strength and bravery while experiencing homelessness makes me believe these young people can achieve anything.

Thankfully, Covenant House guides them to reach their goals and dreams. They’re surrounded by people who believe in them. And that is why I will Sleep Out again on Friday and why I encourage you to do the same. Or do something else for a cause you believe in. The feeling you get from making even a small difference is something you will never forget. 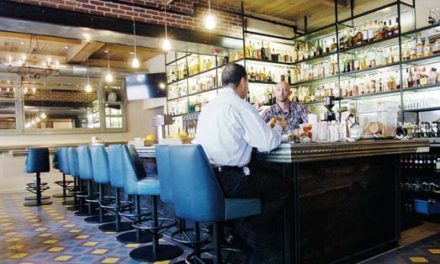