I was about 12 when I knew that I wanted to become a nurse. Several people in my family had medical problems, so I had a fair amount of exposure to hospitals and different people. I just thought that this was something I wanted to do. That was really it.

I started as a labor and delivery nurse. Ninety-nine percent of the time, being a labor and delivery nurse is the most awesome, wonderful place on earth to work, but the 1 percent of the time that it’s not, it is maybe one of the toughest places to work. That was the part that I wanted to do—that 1 percent. The families that had babies that did not survive or had difficult complications—that was what I wanted to help do—care for them. I loved the other part, but that’s not what got me there.

I was a staff nurse in OB from 1977 until about 1988. I was working at what was then Mercer Medical Center. I was a staff nurse on the night shift. I went and made an appointment with the director of nursing for maternal/child health to talk to her about a couple things I had concerns about. She asked me if I had any interest in becoming a manager. I didn’t at first, but she ultimately became my mentor and really encouraged me to try other things. I think she saw something in me that I never saw.

I’m a great example that a nurse can do anything. I have been a staff nurse. I’ve been a director of quality. I’ve been a director of strategic planning. I’ve been the chief nursing officer. I’m now the senior vice president of hospital administration and chief quality officer. Today, there are a million opportunities for nurses because health care is changing so much. It used to be you became a nurse to work in a hospital, but there are many nurses today who never do.

Nursing is at the core of taking care of patients. We’re the people who are there all day, every day. We get to know the patient. We sense when things aren’t right. Obviously there’s a lot of science, but I still believe nursing has a fair amount of art in it.

I did not go back to get my bachelor’s degree until 1995. Subsequent to that, I got two master’s degrees. I was raising two children, working full time, and going to school. If I had to do it again, I might reverse some of the order. It was hard, but it’s part of the personality of a nurse. We do what has to be done.

When we built the new hospital in Hopewell, I had the opportunity to work with a lot of the nurses and help design an environment that was going to be a great place to work. I was able to advocate for getting some of the changes done and some of the modifications made so that the space we created was as good as we could possibly make it.

What I do now affords me the opportunity to advocate for making improvements in the hospital for both patients and the staff. To be able to see how we have to change things and what resources we’re going to need, and to help make it happen, that’s why I do what I do.

Over the years, one of the patients that I most remember came in pregnant with triplets, and she was in the hospital, on bed rest. While she was in the hospital, she was diagnosed with breast cancer. Ultimately, she delivered the babies. They did amazingly well for preemies in the 1980s. A day after having the babies, she had a mastectomy. The staff had a bond with her, so a year later, when she came back for reconstructive surgery, instead of going to a medical/surgical unit, she came back to the maternity unit, and we took care of her. In 2006, I got an email from her, which made me happy because I always thought about her and worried. We went out to lunch, and she told me that she had become a nurse after the triplets had gotten older—they were in second grade at the time she went back to school. Sadly, her cancer came back, and she died about a year and a half ago, but she actually got to raise those three kids. 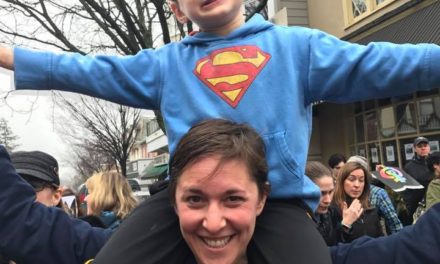 This Surgeon Manages 4 Kids and Her Career. Read How She Keeps Her Sanity